Why You Don't Need Two Spaces

Amongst all the other things I studied in college, I took a few courses in typography and was actually the layout editor where I worked on campus.

As a result, I have an unhealthy obsession with readability/legibility.

When I read a book (or MS), some things just stick out at me so much it drives me nuts. It's not my fault, I've been trained to notice. I'm sure the majority of people don't consciously note these seemingly "minor" typography issues.

One of my biggest pet peeves? Two spaces after sentences. (Please note that I am entirely aware that this is still an acceptable typing practice, as horrifying as it is for ease of reading. I do not condemn you for your vile two-space habit if you have it.)

But, so you know, you don't need two spaces after your sentences. Here's why:

Modern computer typefaces allow proper distance between a period and the next sentence! They program it in, guys, promise.

See, back in the good ol' days when people used typewriters there was only one choice in font: courier. (GAG!!! [can you tell I have opinions on this yet?]) And on those pesky typewriters, each letter (and space) was allotted the exact same amount of room. That meant the "i" had the same space as "m" and "W." So you'd get all these awful ugly gaps of serious grossness.

Since everything was given the same space on said typewriter, you HAD to give two spaces between sentences so everything wouldn't run together in a terrible mess. Once a manuscript was all typed out like that, a typesetter would then set type in a totally different font (thank goodness) and put in the proper spacing between sentences. Then printing would ensue.

Well, word processing has come a long way since then. Now our programs give "i" a small amount of space and "m" enough room to groove. And guess what? They even put the right amount of room between sentences without you having to press that space bar twice. So give your poor thumb a rest and tap it once...if you can. (I know, I know, habits are hard to break. At least now you know it's a BAD, BAD habit;P)
Posted by Natalie Whipple at 3:12 PM 32 comments:

Look Who Came To Visit Me! 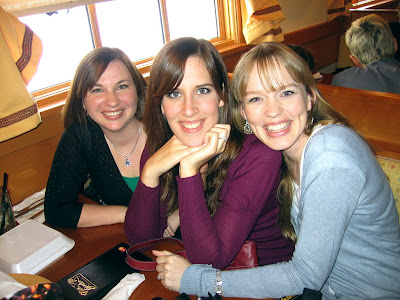 Okay, so Kasie and Renee didn't technically come all the way here to visit me (something about families being in the area?), but they did think it would be cool to see me while they were seeing other important people. So we went to Olive Garden and had a lovely lunch and chatted about writing and our lives and all that good stuff.

I love getting together with writers; they so know where I'm coming from. And it's even more fun when you've read each other's work and can talk about what you love most with other people who've read it AND liked it.

Hope you all have a happy holiday season. I'd say I'm not gonna post...but I probably will because I just like to. So if you're bored or just need a break from the family, my blog is there for you all the way.

I really can't believe it, but that post on Nathan's blog says it, so I'm going with it. Wow! Tough competition; I am really shocked. Thanks to everyone who voted for me and for all the kind words despite my glaring typo (that's what you get when you type something into the comment box...).

Since I'm finishing Sealed today, I guess it's on to the ninjas! Wee!
Posted by Natalie Whipple at 7:16 AM 25 comments:

Nathan Bransford is spreading holiday cheer with another one of his truly entertaining contests. On the menu this time? First paragraphs. Fun Fun. I entered, of course, and if you want to enter head on over before there are so many comments the page won't load. Trust me, it happens fast.

For those who really only want to read my entry, I thought I'd post it here for you. This is the opening to a book that's awaiting attention: Relax, I'm a Ninja. It's the crazy story of Toshiro (Tosh) Ito, whose father runs a karate school...and also happens to be a ninja

According to my father, the first rule of ninjutsu is KISS: keep it simple, stupid. Of course, he says it all ninja-like, but that’s the gist. If you can walk down the street in normal clothes, there’s no need for black garb and grappling hooks. If you can kill a dude in two moves, don’t waste your time with three. And that’s why we run a karate school for all those little kids who get beat up at school—two ninjas hiding in the most obvious place, and the last spot anyone looks.
Posted by Natalie Whipple at 12:06 PM 17 comments:

I just wanted to send a shout out to my writer buddy Kiersten, who recently had her short story Tangle published in Leading Edge's May edition. This publication is one of the longest running sci-fi/fantasy journals out there and is actually run at BYU. So go Kiersten!

I haven't got a hold of the edition yet, but I plan to. And from what I've read from her blog, it should be an awesome little story. I can't wait to read it. (And by the way, she's really funny, you should read her blog.)
Posted by Natalie Whipple at 10:42 AM 1 comment:

While I don't often suffer a bout of writer's block anymore, I constantly go through fits of writer's doubt. Right now I'm in pretty deep.

I have never ever doubted my ability to come up with a killer story, but I constantly doubt the words that come out of my head to convey that story. Am I any good at writing, really? Am I just kidding myself with trying?

Sometimes I feel like I might be one of those American Idol contestants--you know the ones I'm talking about. I think I sound amazing. I think I'm the next American Idol. Then they go up to the judges, and all of America for that matter, and they can't sing a note in tune and forget half the lyrics...then they beg the judges for another chance because they just know they are a star.

I know that kind of doubt is unhealthy, but sometimes I just can't help but think that even if I have a great story idea, I'll never be able to execute it well enough to merit publication.

I used to believe in writer's block, but as I've gained a more professional view of writing, I've decided that's just an excuse not to put out some words. Sure, the words may be crappy, but I've found the best way to get past a writing hurdle is to plow right through it if you have to. You can always go back and fix it later, sometimes it's more important to get it all out on "paper" first.

To mend my need to be lazy (which is when I claim writer's block), I have set out goals for myself each day. Right now, I live by minimums, since my kids take up so much time. I write at least 1,000 words a day. I am happy if I get more, but I force myself to write at least that. Sometimes it's tortue, sometimes I think the words are pure crap, but I'm always happy I trudged along a got something done! That's 7,000 words a week, I say to myself, that means I could finish my first draft in a month!
Posted by Natalie Whipple at 9:28 AM 6 comments: