Late last night, on my way to Taherah Mafi's and Ransom Riggs' signing at The King's English, I realized it was the 21st, which meant that TRANSPARENT was exactly three months from debuting. My reactions were as follows:

2) Three months isn't that far away.

3) How did it take me the WHOLE DAY to remember that? Whatever happened to me counting the hours in meticulous insanity?

Ah, publishing time. I suppose I've been waiting so long that I have finally stopped actively waiting for stuff. That's a nice feeling. I remember when waiting consumed every moment of my life to the point that I had a nervous breakdown. I remember when watching time go by with nothing happening made me angry and frustrated.

Two years ago, I was getting ready to go on sub with TRANSPARENT. It had been three months since I gave up on my previous submission, so nineteen months since I'd gotten an agent. This was my "last ditch effort" at the publishing thing—if TRANSPARENT didn't sell, I'd decided I couldn't put myself through more. I would disappear and live my quiet life happily without the waiting.

Six weeks later I had an offer. And it was awesome, though I cried at the thought of having to wait 25 whole months until my book actually hit shelves. Would anyone even care by then? Would I care? How in the world would I blog for two more years when I was already out of material? It felt so far away—it WAS far away—and yet looking back I think I'm grateful for these past two years of waiting. It might sound disturbing, but they kind of beat me into submission. I've been forced to focus my efforts elsewhere, since there was nothing I could do about my determined publication date.

So I wrote other stuff. I had a baby. I lived my life and discovered there was a lot more to me than waiting to be published. Sadly, in my pursuit of an agent and a sale, I had forgotten that. I learned to cook new things. I made new friends. I savored moments I had previously deemed worthless when publishing consumed my life. I realized how messed up I was, how skewed my priorities had become.

Now, three months out from publication, I'm kind of shocked at how zen I feel about it all. If I'd debuted two years ago, I imagine I'd be reading every review and stressing over rankings and driving myself insane. Those are things I rarely think about these days. My eyes are on my own paper, my own stories, and I'm just trying my best to get better.

I have no way of knowing if I'll be able to maintain these sentiments as publication approaches, but I sure hope I can. 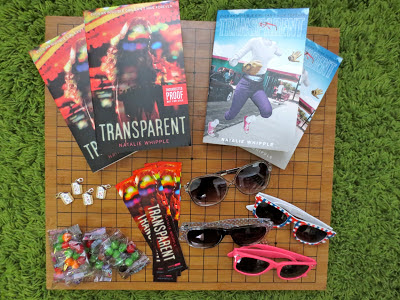 Look at all the goodies! Do you want them? *dangles carrot*


Fun things are happening this week and next! First I'll be at LTUE—if you come be sure to catch my panel on Friday at noon (on pov in YA). And also at LTUE, I'll be giving away two TRANSPARENT prize packs at my reading, which is at 2 o'clock on Friday. Look how pretty all that stuff is! You know you want a chance to get one. 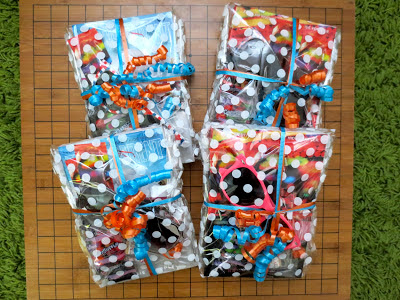 All wrapped up and ready for their new homes.


Then next week I get to go to San Diego for the Kasie West/Kiersten White signing—I'll be brining two prize packs to that event as well! They are very nice to let me crash their party a little, but I'm just SO excited for the world to have PIVOT POINT and MIND GAMES. They are two of my favorite books.

Hope to see a lot of you this week and next! Please say hi to me if you catch my blindingly red hair first. I promise I don't bite.

So yesterday I talked about things to consider when building a place/setting (And totally forgot language, which I am thoroughly ashamed of). Today I want to talk about how you use a setting to its fullest potential. Because a setting in a book isn't like the painted wood trees in an elementary theater performance—it's living and breathing and waited to be interacted with, and also to act upon your characters.

I suppose it comes down to that whole Show vs. Tell thing. There are certainly times for both, but showing setting details when you can brings a world to life. I mean, let's look to the great JK Rowling for this a second. She talked about the big quidditch cup tournament, but then she also showed the tournament. For me, that's when the excitement and reality of it happened. Same with the Tri-Wizard tournament. And the Basilisk. And the pollyjuice potion. And the owls. Even down to wands choosing their wizards.

This also goes for characters. They shouldn't be plunked into a setting and not have been impacted by that place. For it to feel like a fully realized world, the characters have to truly be part of that world. This probably sounds obvious, but it doesn't hurt to give it a little extra thought.

For this I'm going to reference The Hunger Games. Like Katniss or not, she is truly a product of her world. She was never my favorite person, but I fully believed in the person she was and understood why she was making the choices she did. Not only that, but I wasn't a girl plucked out of now and placed in a novel. I can't think of anything place but District 12 as Katniss' home. That takes a lot of skill!

And finally, a setting should impact the plot. Also obvious, but if a story can be set anywhere, why set it in a fantasy world, you know? The things characters have to work through must be integral parts of the world. Like in Dune—the spice, the worms, the fremen, the politics—they served the plot just as much as the characters.

So as important as building a place is, using that place is what makes a novel magical.

Often people equate "setting" with "description," as if a ton of descriptive passages are what create a rich sense of place. I'm gonna disagree a little. While description can be an important way of explaining your setting, there is so much more to it.

True skill in setting (in world building, really) is the ability to get a reader to believe in the place you've created, whether that be a fantasy realm, other planet, historical period, or even a contemporary city. A writer can be great at describing, and yet still weak in creating a world that readers buy into. Building a place goes far beyond describing what that place looks like—it should be featured through the novel's action as well, built into your characters' identities.

So, some of my tips. In no particular order. Obviously these are not ALL the tips, but hopefully if you're looking to flesh out your setting this will give you stuff to think about.

Place Names: For the most part, places are named for three things: 1) The founder or a prominent historical figure (Washington D.C.), 2) The location (Salt Lake City), 3) The major industry in the area (Coalville). There are also "renaming" instances when areas are conquered/claimed and named after locations in the conquerer's native land (Pretty much anything with "New" in it). So if you're creating a place, logical names for that place set a foundation. Streets, suburbs, parks, monuments, etc. All opportunities to give more depth.

Food: I am quite partial to this one, personally. Food says so much about a place—and your characters at that. When thinking about the kinds of foods to include, it's important that they match the climate of your setting. A cold place would feature less fresh produce and more preserved goods. A warm place would have more fresh food. Seaside? Seafood. Mountains? Game. Grain Farming community? Probably lots of breads.

Nature: The natural landscape plays a big role in how a place works. San Francisco wouldn't be San Francisco without those hills, you know? Think about what surrounds your place—rivers, mountains, deserts, canyons, etc. What have people created to overcome those surroundings? What types of activities take place in these areas?

Origins: It can be interesting to figure out/learn why people settled an area in the first place. Did that desert town spring up because of trade? Or because the people who founded it were persecuted and had to find a place people wouldn't bother them? These reasons can greatly influence the culture of a place and give a sense of believability if it all works together.

The Arts: Visual, music, dance, theater, literature—these all have potential to help shape your world. What the people in your world value in terms of art, be it perfection or energy or chaos, says a lot about them.

Celebrations/Traditions: Holidays and festivals are a big deal. Many tend to center around seasons, but there are also celebrations/traditions dedicated to the dead, to victories in war, to beloved leaders, to sporting events, and of course religion.

Clothing: What people wear says a lot about them, whether we want it to or not. Clothing can create instant class distinctions, give hints to the climate, distinguish beliefs, mark professions, and show personality.

Weather: A place's climate plays a huge role in how people live. Whether it's hot, cold, humid, dry, weather impacts what activities people do, what they eat, how they travel, what they wear. It shouldn't be ignored.

And I'll stop there. Maybe next time I'll blog about how to incorporate these things in other ways besides your traditional descriptive passage.

Posted by Natalie Whipple at 9:34 AM 8 comments: