A few people have expressed an interest in learning more about anime, but not knowing where to start. It can be overwhelming! Sometimes I'm still overwhelmed by just how much is out there, especially since it's so much more accessible than it used to be.

Shall we start with a basic definition?

Anime: Animated TV series and movies from (mostly) Japan. And for the love of Pop Tarts, do not call it Japanimation. Ew. Even typing it made my blood curdle. It's anime, as in ah-ni-meh, if you wanna get really specific.

This is why I hate hearing someone say, "Oh, anime—I hate Bakugan. Anime is stupid." Bakugan (or Digimon or Pokémon) is just one sub-genre of children's anime. But many westerners assume—because here cartoons are for kids—that this is the only thing anime has to offer.

Not true. Not at all.

Anime Characteristics: I think most people are more familiar with the look of anime than they used to be—the big eyes, the typically thin, willowy figures, and the crazy hair. But there are a lot of different styles, and some of "the greats" don't fit that mold at all.

But no matter the anime style, there's a lot of expressiveness conveyed. Eyes are enlarged or shrunken for a purpose—to convey a certain emotion. Same with mouths. And chibi style (when the characters are small and cute). The tear drops and other symbols are meant to exaggerate emotion.

American cartoons do this too (though anime does it better, hehe), just in different ways—eyes bugging out, heart popping out of chest, steam coming out of ears, etc.

What You Should Know Before You Watch: First, you should know what genre of anime the series is, because it may surprise you content-wise. If you're expecting something that's good, clean fun, then you might want to stick with children and tween anime.

Nudity and violence standards are different in other countries, and there is often more blood and gore in teen anime than some people might expect. There is sometimes nudity, but it's in the form of what I call the "Peach Bodysuit." No details, like a Barbie or Ken doll. If you are sensitive to those issues, you'll want to investigate the series first.

Luckily, you don't have to necessarily buy a series like you used to. There are many on Hulu and Youtube that are sponsored, and you can watch full seasons without the guilt of internet piracy. Or you can watch a few episodes, decide it's not for you, and move on.

How To Watch Anime: Dude, watch it in Japanese (English subs) and save yourself the torture of poor English dubbing. Seriously. I've watched anime in both, and I promise the experience is better in Japanese. The English is often overdone, because they're trying to make it American...and it's just not. They usually choose horrible, annoying voices, too, where the Japanese voices fit the characters.

Yeah, yeah, "it's hard to read subtitles!" Boo hoo. You get used to it. Trust me on this one.

A Few Recommendations:
(Please feel free to add your own in comments. I do not pretend to have seen every anime series out there, and I will miss some great ones.)

You might already be familiar with Miyazaki's work, since Disney/Pixar's John Lasseter decided he'd "introduce Miyazaki to the world." (Except a lot of people already knew that Miyazaki is way, way cooler than Lasseter. Times ten. He's like the Godfather of anime.) Disney has since promoted My Neighbor Totoro, Kiki's Delivery Service, Castle In The Sky, Spirited Away, Howl's Moving Castle, and his most recent Ponyo.

Miyazaki's work spans both children's and teen anime, with movies like Ponyo and Totoro being for a very young age group and movies like Howl, Naussica, and Princess Mononoke being for a teen and older audience.

You can't really go wrong with Miyazaki. Everyone has their favorites, mine being Kiki's Delivery Service, Castle In The Sky (Laputa in Japanese), and Howl's Moving Castle. But I like them all—I haven't seen a Miyazaki film I didn't like.

Action-Based Anime (some would say "boy anime," but I love action-based so nyah): 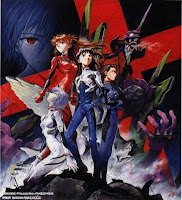 Evangelion: Shinji is chosen to pilot an Eva—the only machine/thing strong enough to defeat the never ending barrage of "angels" sent to destroy what's left of the human race.

Seriously bloody (I'd say an upper teen anime), but freaking awesome. I think it's still one of the most popular series I've seen out there. It's the machina (giant machines) trend at its best. 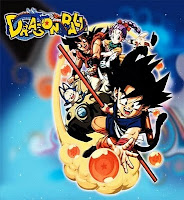 Dragonball: Yeah, it's old school, but it's awesome! It starts with Goku—a boy with a monkey tail who's from another planet. Dragonball Z was on Cartoon Network back in the day, which follows both Goku and his son Gohan.

Lots of fighting, but not bloody. I'd say it's in the tween category. 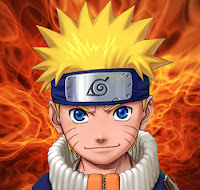 Naruto: Ninjas! Naruto is determined to become his Clan's top leader...except he's kind of a goof with a temper. Also in the tweenish category. 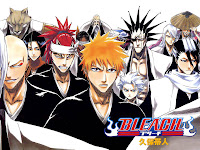 Bleach: I cannot express how much I love this series right now. Ichigo becomes a Soul Reaper, charged with saving souls from the Hollows, evil dead spirits. Bloody, but not as much as Evangelion. And there's...um, a few large-breasted women, though I'm four seasons in and no kissing. Definitely in the upper teen category.

Romantic-Based Anime (some would say "girl anime," but it often has a healthy amount of action so nyah):

Fushigi Yuugi: Miyaka is sucked into a world like ancient China, where she must become the Priestess of Suzaku. As Priestess, she will be granted three wishes if she can gather the Suzaku Seven. Kissing, betrayal, action, and a bit of comedy.

There's a little blood, and some, uh, precarious romantic situations. The series would definitely be in the teen category. It's one of my favorites.

Escaflowne: Hitomi falls into another world (yes, a common theme), where she has more control than she realizes. Machina, winged guys, war, Atlantis.

This one is pretty dang clean. I'd put it in the tween category. The animation is a little older in style, but the story is fantastic. 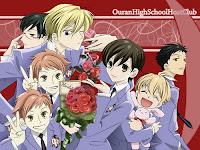 Ouran High School Host Club: Haruhi, a tomboy, is mistaken for a boy and recruited into a "Host Club," where rich boys entertain bored, rich girls. It's gender bending. It's hilarious.

Clean in my book, though I suppose I should mention it deals a lot with gender and orientation, but I think in a very smart, mature way.

Okay, I think that's a long enough post. Anime is awesome. Go watch some!
Posted by Natalie Whipple at 8:32 AM