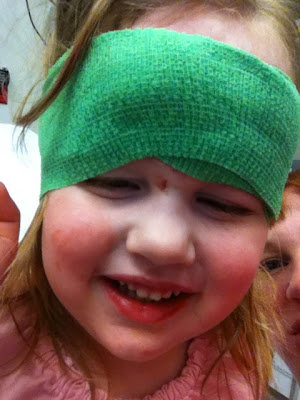 So this happened. That would be my Ninja Girl in the ER awaiting stitches. She fell at grammy's house, bouncing around and excited to go to the park. Instead of slides and swings she got 15 stitches—5 in an underneath layer, and 10 on the top layer. (I hadn't even known about LAYERED stitches, but apparently when the cut is deep enough...)
You'd think that'd be enough trauma, right? 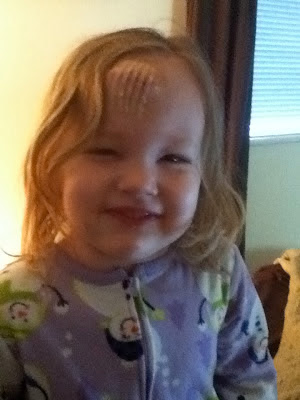 Well, when they took the stitches out yesterday things got...troubling. Her eyes and forehead swelled up like crazy (Which is why I'm posting pics for once because she hardly looks like herself!), and even though the ER swore this was normal it didn't SEEM normal for swelling to happen five whole days after and not on the day of.
Promptly after I took this picture, her scar burst open, oozing puss and blood like a giant zit. And it just kept going, clearly infected and NOT normal. Urgh, ER. I was not wasting more money talking to them, so I had to wait out the night with poor Ninja Girl and take her to her doctor this morning.
He was not pleased that they didn't acknowledge the infection, and now there isn't much we can do except keep the thing gauzed up and cleaned while the antibiotics do their work. 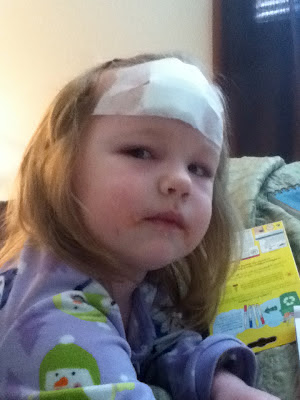 Ninja Girl is taking it like a champ, though, even if she looks like she's been in a fight. She's been shockingly cheery through it all, save the shots this morning. I think she cried more over those than anything else, which made me laugh. I mean, she's got this HUGE wound on her forehead that is swollen and infected and oozy, but those two needle pricks brought her to her knees! Ha.
Anyway, this has taken up a large bulk of my life this week, and it seems as if this will continue for the coming weeks. It's been a scary and weird thing to deal with, as it is the first time either of my kids has had an injury that couldn't be fixed with a kiss and a bandaid. It's been quietly stressful for me, I think, sucking the energy out of me (And I'm sick yet again, yay!). There's nothing quite so horrible as watching your children suffer, even when they do it with far more cheer than you ever thought possible.
Posted by Natalie Whipple at 12:25 PM