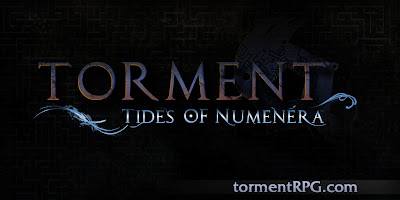 I've been sitting on several secrets, but today I finally get to tell one! And I cannot begin to tell you how freaking excited I am to be involved in this on any level.

I get to be a writer for Torment: Tides Of Numenera! It's an RPG (role playing game), which if you don't know is kind of like a book as video game. RPGs follow specific characters, they have a storyline, they are my favorite kind of game hands down.

So when Adam Heine approached me about the possibility of joining this team many months ago, of course I jumped at the chance. Even though I had no idea what the project was at the time. Or if I'd actually end up on the team. I mean, teen-me had often dreamed of writing or designing for an RPG—how could I pass up even the smallest chance? I knew it might be a long shot, but I'm in publishing and very used to long shots.

InXile began their Kickstarter for Torment: Tides Of Numenera almost a month ago, and it was the record breaking earner on the site until that pesky Veronica Mars movie came along. When I saw the Torment art and read about the concept I couldn't help but salivate. This is the kind of game I feel privileged to be involved with. It is deep and character-based and full of potential awesomeness. Not only that, but I'll get to work with incredibly talented writers. Like, um, Patrick Freaking Rothfuss. For reals. Whenever I think about this game I have to restrain myself from squealing.

So yay! The news is out! If you feel like donating to the Kickstarter, there are some pretty awesome rewards. And if not, that's cool, too. But the game only gets better and better the more they have to invest in it. I can't wait to see it all come together.

Posted by Natalie Whipple at 8:18 AM