Transparent Is OUT. I am PUBLISHED. 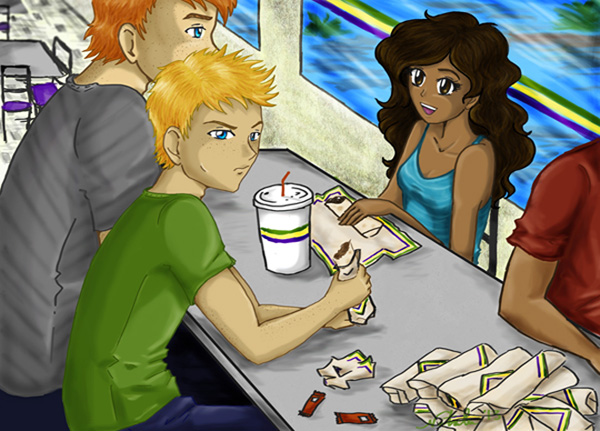 Of course I had to do a special drawing for the occasion! This is Fiona's view of the Taco Bell scene, which is one of my favorites in the book. There is also another special art piece up at Beth Revis' blog! Check it out.

Actually, I'm writing this ahead of time, which makes it hard to know exactly how I'll feel when I wake up on May 21st knowing that TRANSPARENT will hopefully be stocked in stores, that pre-orders will be shipped and the buy buttons online will work. The thought right now is...surreal.

I know, I've had over two years to internalize the idea that I actually sold a book and it's actually going to be purchasable and maybe even people will BUY it and READ it. But part of it still doesn't feel real. Even now, as the day is upon me. I keep waiting for it to feel real—I'm starting to wonder if that might never happen. Maybe it will always feel like a dream, fragile and impossible and just out of reach. Or maybe it'll eventually sink in, that this thing I've been working towards for the last 8 years has finally happened.

Eight years, guys. Pretty much the entirety of my twenties. I remember when I was entering my last year of college at the ripe old age of 21, married and pregnant because that's how Mormons roll, dude. I was finishing my last classes for my degree in English linguistics and my minor in editing. The fact that I was almost done hit me right in the face.

That question kept coming back over and over. School was all I'd known, and now not only was I going to be a new mom but I would be someone that didn't have to go to class and take tests and what was life outside that? Even my campus job would have to be abandoned, since I was graduating. And I loved working at that magazine like whoa.

I would soon have a degree and a baby and a new life ahead of me. All those plans and goals I'd worked towards were suddenly on the verge of being accomplished. What now? What comes after the "happily ever after"?

I had no idea.

So I did what any over-acheiver does when they've completed their list of goals—I made another list. It was a very grown up list that I certainly didn't feel ready for, but I made it anyway because I'm not the kind of person who can function without a clear direction. It went something like this:

• Learn 3 languages (I was an English linguistics major, after all)
• Travel to Japan and New Zealand at least once (Someday. Some. Day.)
• Buy a house (Again: Some. Day.)
• Write 6 novels before I die
• Publish at least 1 novel

That was it. Not a long list, right? I was both surprised and scared about how short it was at first. And more than that, I felt...ashamed, almost, that writing had 2/5ths of the list despite my best efforts to pretend I didn't want to write a book. (Apparently I wanted to write 6. Ha. I don't know why I picked 6. I hate even numbers, ugh.) I'd tried to be practical about writing. I knew it wasn't something easy to actually do as a career. And yet when I was being honest with myself that was all I ever wanted to do—I just didn't have the courage to do it.

Well, I was a poor college student, so I couldn't buy a house or travel. I was already learning French, so I figured I was good there. Which kind of left the whole writing thing as the goal I could actively pursue.

I started writing an old idea from my high school days. I called this "actively pursuing" though I wrote when I felt like it and didn't really tell people I was writing. It was just for fun. Back then I was okay with that.

I don't want to get too long here, so I'll skip the year and a half it took to write that book and my first attempts at querying. Let's just say after my first 5 rejections I was about to wuss out on the whole venture—I was sure I wasn't cut out for publishing. I would write as a hobby and read and live my life happy with that. Eventually I'd get to my 6 written books and my kids would read them when I was dead and that was more than enough.

Then came one of those tiny moments that turn out to be big moments. Turning points, if you will. I was at Barnes & Noble buying books. Once I'd gotten my stack, I perused the notebook section because I'm a notebook junkie and that's what we do. A gold bookmark with orange lettering caught my eye (I do love me some orange.). It simply said:

"Go confidently in the directions of your dreams!" —Henry David Thoreau

This one little line turned my world upside down. Here I was about to give up before I'd even really started. Why? Because I wasn't confident I could do it. I was never a confident person by nature. Doubt still plagues me daily. The idea of striding towards my dreams with my head held high—exclamation point and everything—blew my mind. Was that even possible? Was that how people got what they wanted? Maybe I was doing things wrong. Maybe I needed to believe in myself more.

Yes, all this from one little bookmark. Which I bought and then promptly lost. Of course.

But I never forgot that quote. I put it by my computer. Then on my blog when I made one. My mom has even made an art quilt with those words on it just for me. (Because she's awesome like that.)

So I decided to keep trying, even though writing and putting myself out there to get hurt was the hardest thing I ever did in my life.

It did not go well. For a long time.

I have over 200 rejections logged over 4 separate projects. I spent years in the query trenches trying to figure out what the crap I was doing wrong (Answer: my writing sucked and I had a lot to learn.). I wrote 8 books over the space of about 2 years (DO NOT do that. Bad, bad idea.). I spent 9 months editing that book #8 for an agent before he offered representation, only the have that book not sell to a single editor over the space of 15 months.

Go confidently? Ha. By the time I'd gone through all that, I had no idea what confidence even looked like anymore.

But hey, I did write those 6 books I wanted to write before I died! Didn't have anything else on that short list, but 1 out of 5 wasn't so bad.

By the time I went on submission to editors with TRANSPARENT (my 10th novel), I had one foot out the publishing door. This was it, because I couldn't keep doing this to myself, I thought. The supposed pay off was fast losing to the emotional anguish. I was tired. Beat. Done. If this book failed, I figured I could walk away knowing I gave it a good honest effort. I started when I was 21—and I was 27 when TRANSPARENT when out. I'd spent enough of my life trying for this goal. More than my time in college. The entirety of my marriage and children's lives.

Then it sold. And I had to wait two more years for it to come out. So I had a baby because why not? Now the day is here—the day I get to cross off that silly goal I made 8 freaking years ago.

Wow. I had no idea how long it would take me to do that, or if I even would. And I even have another book coming out next year. Though I've been through the wringer to get here, I did it. TRANSPARENT may not be a huge book, but it's the culmination of almost a decade of my life dedicated to one seemingly-impossible goal.

I will never claim to be a great writer. I'm not sure I have any natural talent for it. But I did work my butt off to become good at it. My hard knocks taught me. And I suppose that idea of "Going confidently" never left me, because there were many times I should have given up and didn't. Perhaps deep down inside, I really did believe all along that I could make it happen. And it did. Not at all in the way I imagined it would. But it did.

Today I'm going to be proud of all my bumps and bruises, because I am officially a published author. Thanks to everyone who's been there for me along this bumpy road—I wouldn't have gotten here without your support.

What now? Well, I guess it's time to travel and learn some new languages.