BLINDSIDED Is Coming! You Could Get One! 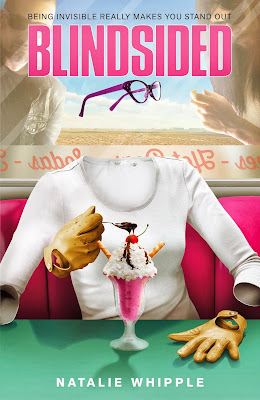 Three months from today, BLINDSIDED will officially be out in the world! Can you believe it? I hardly can. It's not often that a book you started writing this year comes out almost exactly a year after—I'm honestly still getting used to the fact that it's done, and here people will be able to READ IT.

I think the weirdest thing of all is that BLINDSIDED hasn't had the whole ARC process like my other books. Not even many of my writer friends have read it! So I haven't seen much feedback about whether on not people like it, and that's a bit scary but also kinda cool because I don't get slammed with the random tweeted @ me bad review or what not.

Things are about to change. Because I will soon have FINISHED COPIES of the mysterious BLINDSIDED, sequel to TRANSPARENT, that I'm pretending you are all dying for. In fact, Hot Key told me just today that they are packing up my author copies to send across the pond—and they are including FIVE extra copies for you guys.

Yes, you read that right.

I have super early finished copies of BLINDSIDED, and I am giving FIVE of them away to you lovely people.

How You Enter To Possibly Win BLINDSIDED (and swag):
Fiona, leading lady of the TRANSPARENT series, loves funky glasses and shades because wearing them helps people know where her invisible face is. So in honor of her, I want you to take a picture in the coolest glasses/shades you have or can find—then post that picture to My Author Facebook Page OR post it on Twitter with the hashtag #BLINDSIDEDcontest (you could even @ me if you want to be sure I don't miss it).

I will take the names of the entries as they come in, and then five will be drawn as winners.

Deadline:
You have until October 9th, midnight Mountain Time, to enter.

Also, yes, the contest is international, since there just won't be that many chances to win an early copy! I may be able to do one or two more giveaways, but if you want BLINDSIDED before it comes out don't miss this chance to get it!

Posted by Natalie Whipple at 6:22 AM