I have decided to give you an early Christmas present. Or maybe I'm giving myself an early present because I can't stand to sit on this kick butt cover any longer. So, without further chit chat: 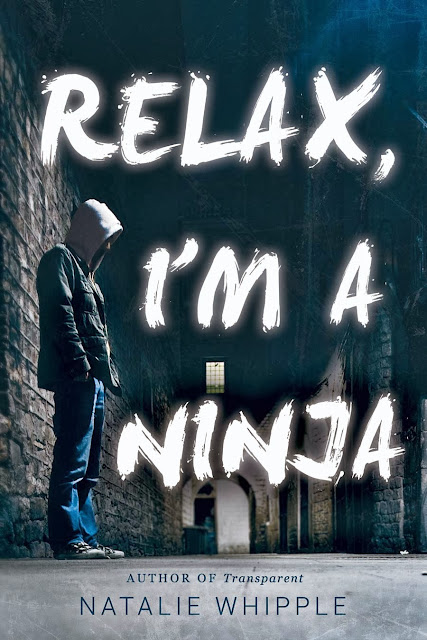 I have to admit I'm more nervous to show off this cover than ever before, because for the first time I had an integral role in the design. While of course I hired the fabulous Michelle Argyle (design alias is Melissa Williams Cover Design), she took her direction from me. That is a freaky place to be!

When she first asked me what I wanted, I honestly didn't have any big ideas because I was used to not thinking about it. I mean, in traditional publishing, it's just better not to get married to a cover design you imagine for your book because it WILL NOT turn out like that ever. So Michelle had to squeeze descriptors out of me, and we searched image-leasing sites, and we scoured the internet for fonts, and this is what happened.

I'm pretty proud of it.

I didn't want a cover plastered with ninja clichés, but I wanted to have a ninja feel. I wanted it to be simple, but not boring. I wanted it to be hard, urban, and yet hint at some playfulness and paranormal as well. I wanted it be look plain cool, to hopefully appeal to its intended audience. Michelle did an amazing job of translating my desires into an image I'm so excited to have on the cover of my novel.

I hope you're excited, too, because I've decided this book will be coming out June 3, 2014! It works a little differently with self-pubbing—getting the novel uploaded to all the many sellers—but it will definitely be available by then at the latest.

And if you're curious as to what's inside, I have cover copy for you! So many presents!

A Clan of ninjas in San Francisco may sound improbable—but as the son of a ninja master, Tosh Ito knows what lurks in the shadows of his city. Or at least he thought he did.


Whew. I need to take a deep breath here. I'm actually shaking as I write up this post, because I can't believe I'm really doing this. RELAX, I'M A NINJA will be a book after five years of writing, editing, failed subs, and then a long stint in the book vault—that's totally crazy to me. Even if I'm doing it on my own, without publisher "validation," this means the world to me. I have always wanted to share this story, and I hope it finds people who love it despite it being a little different.

Thanks to everyone who has been excited about this with me. No joke, you are the reason I have the courage to do this—I would have never gotten past all the publishing hurdles without you guys cheering me on.

So go forth! Share this baby all you want. It's been dying to meet the world for a long time now.

Posted by Natalie Whipple at 1:00 AM