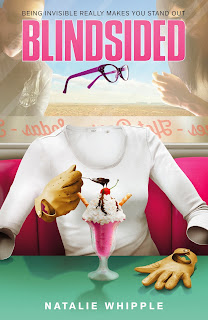 Today is the day! I officially have two novels out in the world and a series published (okay, a duology) and all that stuff. I'm quite excited for TRANSPARENT fans to be able to read the rest of Fiona's story, and I hope they enjoy it.

Ever since Hot Key Books approached me last January and asked me to write this sequel, I've felt incredibly lucky. By then I had accepted that, even if I'd always felt like there was more to Fiona's journey, I wouldn't get a chance to write it. I had made peace with that. So to suddenly be told that I'd get to finish what I started felt like a gift. A difficult gift, but a gift nonetheless.

Since BLINDSIDED was kind of a "surprise" in my career, I have to admit this day is much less stressful than my debut in May 2013. It feels like icing on the cake in a lot of ways. And how can you be worried about some extra frosting?

Maybe it's also that second books are less pressure—at least for an author who is not a bestseller or even close and has no expectations to be so (it's probably different if you're the author of a very popular series). I wrote this book for the people who already love TRANSPARENT, you know? And since there were no ARCs and little publicity in the US (different in the UK), I admit it has been blissfully low-key, with few early reviews to derail my confidence like with my debut.

BLINDSIDED has lived up to its title at almost every stage. Surprises around every corner! So I don't quite know what to expect now that it's out in the world, but by now I'm assuming it won't be anything predictable. That's kind of exciting.

You can order BLINDSIDED though these venues:

Amazon
Book Depository
IndieBound
The King's English (If you order online or call 801-484-9100 today, I can sign and personalize your book at my signing tonight and they will ship it to you!)


There will be TWO signings in January for BLINDSIDED:
BLINDSIDED Launch Party:
January 2, 2014
The King's English
Salt Lake City, UT.
7PM
(If you want to pre-order a signed copy—or you can't get there and want a signed copy—call the store at or.)
Southern California Signing—With Kiersten White and Shannon Messenger!
January 23, 2014
Oceanside Barnes & Noble
Oceanside, CA
6PM
Posted by Natalie Whipple at 2:00 AM