It's no secret I'm a fan of anime, and now that so much is available online I've been trying to catch up. *sigh* It's been wonderful. Today I'll be geeking out about what I've been watching, most of which I'm sure is old news to anime fanatics. Like I said—catching up.

Inuyasha:
If you follow me on Twitter, you've heard plenty of me mooning over this show. It's everything I love about anime—action + romance (leaning more to action, though), demons and ultimate evil, humor, and feudal Japan. It's also pretty clean, and the translators opted to use tamer words for the "swearing."


Bleach:
I'm a huge fan of action-based anime, and Bleach hits all the right notes. I've enjoyed it immensely, though Season 3 (or there abouts) is, uh, not my favorite. I haven't read the manga, but I have a feeling it's filler. Some people may not be a fan of the bloodiness, but from the anime I've seen it's about middle-of-the-road gory.


Ah! My Goddess!:
I wanted to watch this series when I was a teen, but moved to Utah RIGHT BEFORE my friends were about to start it. So I missed it, which was very traumatic for 14-year-old me. I bought the first season, and it's totally adorable. It's about a shy, short college boy who can't get a date. He accidentally calls the Goddess hotline and ends up getting wish. He wishes for a Goddess to stay with him. 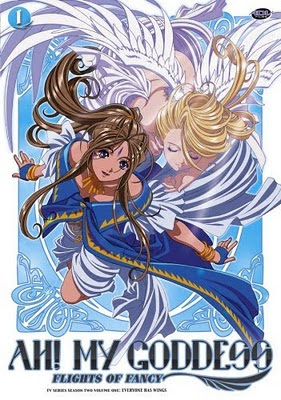 Vampire Knight:
I just started watching this, and holy crap it made me like vampires again! Anime is a brilliant medium for vampires, since that "otherwordly perfection" can really be achieved. Let's face it, putting white make-up on a human just doesn't quite cut it.

So far, Vampire Knight is juicy, gothic, and creepy. It's alluring and dangerous. It's everything vampires should be.


The Melancholy of Haruhi Suzumiya:
I bought the first three manga, and I kinda wish I had them all now. Okay, I hate that I don't have more to read RIGHT NOW. It's narrated by a boy named Kyon, but the story is really about this crazy girl named Haruhi, who wants the world to be much more spectacular than it is. I love it. 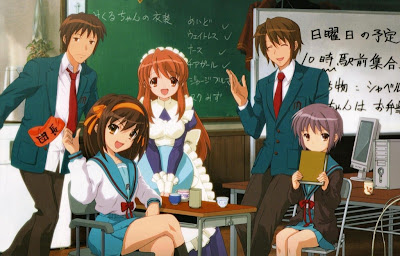 So...yeah. It might look I'm on a crazy anime binge about now, which would be entirely true. I won't deny it. I'm far too used to people calling me crazy to be swayed by those looks you're giving me. Now, off to start reading Fruits Basket, you know, since I can't edit until my kids are in bed anyway. Wee!
Posted by Natalie Whipple at 8:18 AM