Happy Writers: It's Never Over 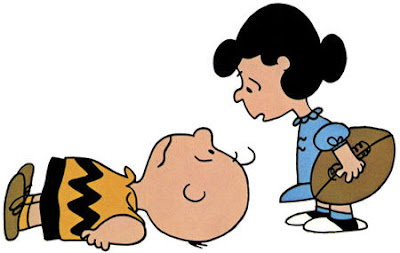 Oh, Charlie. You just keep trying and trying...
I used to think there'd be a point in my writing life where the publishing gods would officially ban me from trying to get published.
Like, on my fourth queried project (my 8th finished novel). I sent it out with great trepidation, positive that these agents I've queried two or three times already would finally say, "Okay, dear, since you can't take the hint, IT IS TIME TO QUIT." I mean, surely there was a limit. After someone queries that long, no success has to mean it's over, right? Clearly I wasn't good enough, and yet like a stubborn ox I kept at it.
Well, you all know I got an agent—an agent who'd seen my very horrible beginnings, no less. AKA: My greenest of queries on project #1. And it didn't matter. All that mattered was my current project.
Sometimes it sounds like you only have one chance. One chance to impress an agent. One chance to make it on sub. One chance to be a bestseller. One chance one chance one chance. It can feel like this business is completely unforgiving. If you don't nail the query the first time, you are doomed. If you don't sell in the first three weeks on sub, you won't. If your first book doesn't sell well, you will never sell a book again. Etc. and so forth.
But take this from someone who has had a lot of second chances—it's never over.
If you have the will to keep going, you can. You would be surprised how forgiving agents and editors can be. They are not the unfeeling, stiff characters they are sometimes made out to be. There is such a thing as a second chance. Even a third and fourth and fifth. Every time I thought, "Surely, this time it is over. This time I have failed so hard I won't be able to get back up," I was wrong.
Like good ol' Charlie Brown, I just had to try and kick that football again. I had to hope that someday I'd kick it. And I did. And I will again.
Because it is never, ever over.
Posted by Natalie Whipple at 8:36 AM