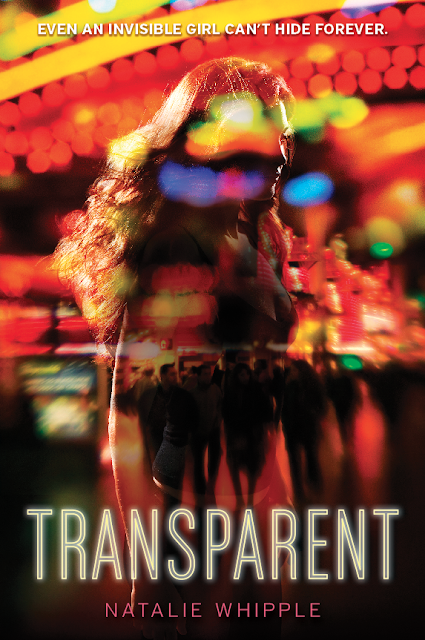 That's all you really want to see, right? No scrolling here—I give you what you want when you want it! It's pretty cool, no? I gotta admit I was afraid of what my cover would look like for a long time. I mean, when your MC is invisible...let's just say there are a lot more ways to make that cheesy rather than cool.

I love the direction HarperTeen took with TRANSPARENT. It has a "girly Jason Bourne" vibe to me. The cover somehow manages to be kind of dark while also being blindingly neon. How, I don't know. They are geniuses. And orange! How did they know I LOVE orange? Also, the tagline is awesome. Don't even get me started on the title font, because I'm pretty much obsessed with it (And it's the font used for the chapter heads, too! Wee.).

So I'm happy. I hope you guys are happy, too. Shall I give you some back cover copy and a blurb? I figure I may as well get all the stuff out in one post. The copy:


An invisible girl is a priceless weapon. Fiona's own father has been forcing her to do his dirty work for years—everything from spying on people to stealing cars to breaking into bank vaults.


After sixteen years, Fiona's had enough. She and her mother flee to a small town, and for the first time in her life, Fiona feels like a normal life is within reach. But Fiona's father isn't giving up that easily.


Of course, he should know better than anyone: never underestimate an invisible girl.


This concludes my All The Good News In October posts. I think. We'll be back to regular, non-exciting blogging next month:)

Posted by Natalie Whipple at 3:30 AM