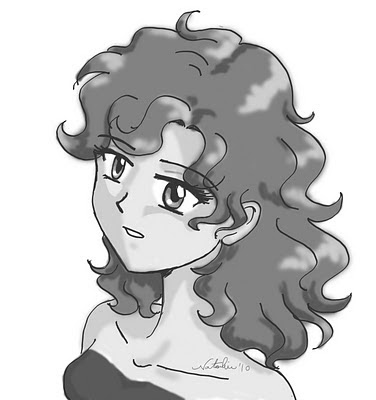 Quick sketch today, but I couldn't flake on that and Kitty, right? So what if I have contest winners to announce? This is just a quick black & white study I did this morning. I tried the calligraphy pen for the lines, that was fun.

But like you guys care—you want to know who won the Revenge of the Five Words Contest, huh.

It was so, so hard to pick! You guys got very creative with these words, and I applaud every person who entered. You took on a challenge! I always like more entries than I can award, but in the end I have to pick three. Sigh.

Huge, Obvious Disclaimer: I am the sole judge of this contest, and I picked purely based on my tastes/whims/opinions. My judgment reflects little on the merit of your writing, so please don't flog me if you don't like the results. In the words of many an agent, this business if very subjective. Sincerely, Natalie

Third Place: Dara Sorensen!
The Talking Sandal
“Why did I want to major in sociolinguistics again?” I said this to myself as I stared out of my window at Mt. Fuji in the distance. A lenticular cloud hovered over the peak of the mountain, giving it the appearance of an umbrella covering it.

I sighed and turned back to the blank document on my laptop. The proposal for my thesis was due the following afternoon and I had nothing but a blinking cursor.

“I haven’t started yet, Emma-san, but thanks for the invitation.”

The stranger’s voice startled me. “Who’s there?” I picked up my stapler and took a defensive stance. I was sure no one had ever been fustigated to death by a stapler, but the only other weapon I had was a souvenir katana stored away in my closet.

A very old and moldy sandal with tiny arms and legs stared at me. It looked like an enlarged version of Plankton from SpongeBob SquarePants.

Whatever it was, I had to get it out of my apartment. “Supernatural or not, you’re leaving!”

The sandal laughed. “I’m afraid you’ll have to catch me if you want that to happen!” It darted underneath my table. I lunged forward, stapler still in hand, and reached for its leg but it wiggled out of my reach.

“You have to do better than that!” It stuck a long, purple tongue out at me.

“Enough!” I threw my stapler at it. It hit the bakezori right in its eye, knocking it flat. I picked it up by its tiny straw leg. “Time to leave.”

I defenestrated the squirming sandal, listening to it screech as it fell four stories to the sidewalk below.

“What next, a singing paper lantern?” I said.

“Emma-san…” High pitched warbling came from behind me.

I should’ve kept my mouth shut.

Dara may not know that bakezori happen to be one of my favorite Japanese mythical creatures. How can you not love this? 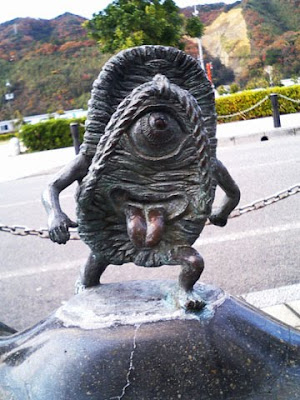 Bakezori, the demon sandal of awesome.
I thought so. Besides that, Dara used the words well and created a quirky little piece I remember even a few days later. Also, it made me laugh, and I can't help loving something that makes me laugh.

I rub my arm, hoping to draw out the stiffness I feel all over.

Where am I? Light filters through a crack over my head. I’m in a tight space surrounded by objects. A few I can discern in the dim light: a plastic katana, large marbles, a giant teddy bear.

The last thing I remember is my grandfather peering through the lenticular lenses of his telescope. He calls it stargazing. I call it crazy. He spends all his time looking for one star, claiming only he knows it exists.

“How do you know it exists if you’ve never seen it?!” I fustigate. “You’ve spent all my life looking for this star! It’s just sick.”

“Depends on what you mean by ‘sick’,” he growls, squinting at the night sky.

“Don’t talk sociolinguistics to me,” I say, kicking at Geppetto as he purrs at my ankles. “I mean sick. Not cool or awesome. Sick.”

Now more light finds its way through the crack, as if the sun is coming up. I shake away the cobwebbed thoughts and lift my hand toward the opening. It snaps back, and a sharp pain shoots through my arm.

What in the world? I hold my hand up, watching the way the light illuminates each finger. And the string attached to my wrist.

My heart races as I inspect the way it grows from my skin. I look at my other wrist. My feet. I reach back and feel the string at the nape of my neck.

Suddenly, the rest of the memories find their way in.

I hold the cat over the window sill, threatening defenestration if my grandfather continues this insanity.

He creeps towards me, his face flush with anger. “Be a good girl, Pin. Put the cat down.” Then his mouth falls open as he stares past me, his eyes glittering with starlight. “I found it.”

I just thought this was so original and even a little bit scary. Jessie was the only person who opted to use the alternate (and easier) definition of "fustigate" (to beat with a club OR to criticize harshly). I really like the backwards version of Pinocchio, I'd totally read a longer version.

First Place: Chris Fontes!
I had never thought my interest in sociolinguistics would get me into so much trouble. All I had done was ask a simple question: “What do you mean, ‘bust a cap’?”

The young man squinted at me. “It mean I’m-a use a fresh clip to expan’ youze mind, cuz!” He removed a brush of sorts from his thick, lenticular hair.

Fascinating! Such an array of ethnolinguistics! The etymological obscurity must stem from social structures, but what did he mean? “Fresh clip” perhaps refers to a magazine from a rifle or sub machine gun. “Expand your mind”… to think outside of my ethnocentric view? No, that doesn’t fit the context… Open… to open… to make open… to make open your mind… to … Oh! To physically “open” the brain! So he means… oh. I see.

“I beg your pardon, but I meant no imprecation,” I said as I fumbled to put my notepad back in the front pocket of my corduroy sport coat.

“What, you think youze smart or sumptin’? You best step off, son!” The angry young man danced a little jig that I assume was a sort of “chest puffing.”

“My apologize young man. I will antagonize you no further. If you’ll pardon me—“ I attempted to evade the young man, but he was quite brash.

“I sayz no,” the young man insisted. He brandished a cudgel from behind his back, of which I supposed he intended fustigate me with.

“I warn you, I am a decorated Kenjutsu sportsman. Although presently lacking my katana, I am not to be trifled with. Now, please. Let me pass.”

The young man swung the cudgel, hideously, and I stepped aside. I grabbed the top of his hair in one hand, and his undergarments in the other. I was about to defenestrate him, then I thought better of it. I tossed him into a nearby table, bowed my head, and bid him “good day.”

What I love most about this, besides the humor, was that Chris really seemed to grasp "sociolinguistics" and used it not only properly, but to its fullest. It wasn't just a side word, but an integral part of the story. In fact, it was the catalyst for the action, which is awesome.

Winners, please contact me with your prize choice. Congrats!
Posted by Natalie Whipple at 9:11 AM