In Which I Answer Kiersten's Q&A For Her

So my dear friend Kiersten White just got back from her book tour. I am very happy for this because holy crap I missed her virtual presence. I mean, yeah, I got to see her twice, but still. 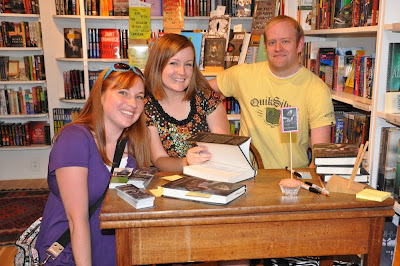 At The King's English. Aren't we cute? (That hot dude is my husband Nick, so back off, ladies:P)
Anyway, Kiersten is tired. I do not like when Kiersten is tired (and overwhelmed by all the life and emails that happened while she was away) because that lessens the chance that I will get to read her writing. And when I don't get the next exciting installment of her work I get very antsy.

I NEED her to write, guys.

So I'm taking over the rest of her Q&A. You know, to help her out (for totally selfish reasons). From here on out, please imagine this is Kiersten. I will do my best to imitate her wit and copious parenthetical statements, but I cannot replicate her typo-less, impeccable writing. Sorry.

Also, you may remember how often I talk about fallopian tubes. I even draw pictures of them.

So gross things while eating? Nah, no problem. Unless we're talking about Glenn Beck.

How do you perceive your characters? Are they like friends to you, or just random people living in your head?

Definitely not random people, but maybe not exactly friends either (Let's face it, who would actually want to be friends with Reth? I mean he's nice to look at and fun to write, but really not friend material. Unless you like your friend to be constantly ruining your life and giving you cryptic, threatening warnings. Then by all means.) It's more like a parental relationship, maybe. You know these people really well and you love them, and you have to mold them and help them along in their story. But sometimes you don't get along or understand each other at the same time.

Does it bother you, hmmmm... feel very intense to write in first person rather than 2nd or 3rd?

yllektra asked: Are there plans of any tour/promotion in Europe...possibly around December 2nd, because erm.. I will be in Manchester! (hee, wow, how self-serving of me) *g*

Nope, sorry. Authors don't decide where they will go on tour, and overseas tours are even more expensive for a publisher. Only if I do really well in the UK (as in bestseller list and a raging fan base) could it be a possibility. Which is to say I will totally be there someday (Okay, I added that, Kiersten wouldn't say that either, unless she's kidding. So maybe she would have added like a big disclaimer here—hey! That's what I did! Ha. Awesome.).

And a strange question...Hmm, I know you celebrate Halloween, so what is the strangest incident that has happened WHILE you were in a costume...or the strangest costume that has "happened" in a normal incident! lol

I don't dress up anymore. If I do people think I'm actually a little kid—that's what happens when you can fit the children's costumes. Of course, being able to trick-or-treat forever is cool, but when they start asking you who did your fantastic "old hag" make-up you feel kind of lame when saying you're not wearing any...

lora96 asked: YA book recommendation? I haven't read a lot of YA until last year...Hunger Games, Graceling, A Great and Terrible Beauty...what's good? (I am not into vampires/werelions/zombie lovers)

If you like contemporary, check out John Green, Julie Halpern, Gayle Forman, Sarah Dessen, E. Lockhart, L.K. Madigan, Stephanie Perkins, and Sara Zarr. (I love me some contemporary these days ["me" as in Natalie, though Kiersten reads a ton and would likely back me up on most of these.].)

As for other recs, I recently read and adored WHITE CAT by Holly Black (and Kiersten did, too, since she was the one who recommended it to me). It's got a mafia vibe plus magic (cursing); it's on the darker side, but not *too* dark. For something light and fun, MY FAIR GODMOTHER by Janette Rallison was a hilarious and topsy-turvy fairy-tale adventure. For a really cool steampunk adventure, try LEVIATHAN by Scott Westerfeld. And if you aren't super into pararomance but want to try something different, I hear there's this book called PARANORMALCY by Kiersten White that is a really fresh take on the genre. Just sayin'.

Also, you cannot go wrong with anything by Ally Carter. I have a raging author crush on her.

Lotusgirl asked: If you were a constellation, what would you be called? and What kind of stars would be found in you?

I would be called The Sleeping Author, and I would be in the shape of a woman passed out at her kitchen counter with laptop open and children clawing at her legs. I would be made up of those really tired stars that are about to go out, and the laptop would be a black hole.

Gjertrud asked: What's your favorite language/languages of the ones you don't speak? Arabic, because Hot Stuff speaks it and there is nothing like having epic poetry recited to you in a foreign language. It actually makes epic poetry less boring.

Mandy asked: As for weird questions... if you could be a food, which one would you be?

I would be cabbage, because then no one in their right mind would eat me.

Also, what would you say to a country who voted for a clown into the politics (yeah, an actual clown. You know... circus; juggling...)

Wait...are you saying the people we do vote for AREN'T clowns? Huh. No, I think clowns would be refreshing. They could do juggling acts in between all the hoopla.

Ashley asked: If you didn't have to worry about price or have to make it yourself what would you be for Halloween?

Katelyn Burton asked: Question One: Do you own a laser printer?
No. But now that you mention it maybe I should get one. Of course, it would take up like all my kitchen counter space...

Evie came with her voice. I actually wrote all my novels in third before that, but her voice was so strong I couldn't imagine writing it any other way. POV and tense usually comes organically with the character for me, but I do tend to prefer first person now and how much I can play with the voice.

It might feel weird to go back to third at this point, but if a story called for it I would. (At this point I feel like I need to add more parentheticals, so here it is.)

Melissa asked: 1. Seems from some of your recent posts that you love a good accent, but would you be able to tell an Australian accent from a New Zealand one?

No, I doubt it, but Natalie might be able to since her grandma came from New Zealand and her new sister-in-law grew up there. Either one is awesome though.

2. If by some miracle you were to embark on a trip to Australia, which particular place in Australia would you most like to visit?

I think a city would be good, since that's probably where a bookstore would be for me to sign at. I can't imagine people swimming out to the Great Coral Reef for a signing. And books, last I checked, are not waterproof. Sadly.

Lauren asked: My question is: when do you write? I am sure that with two small children you need to be rather creative. Can you write even if you have 5-10 min, or do you need a longer stretch of time to get back into your story?

Umm, I don't know? I get it in when I can, but it's freaking hard. Lately I need a longer stretch to get focused, so I head to the library and pound out as much as I can (And then Natalie says she wants more and whines a lot about how I never write enough and can you PLEASE write more because I need to know what happens before next week DANGIT.).
Posted by Natalie Whipple at 9:22 AM