I've been seeing a lot of talk about "strong female characters" online, and I figured it was about time I got my rant on again.

I have to admit this kind of irks me. Not that I personally view a needy, man-obsessed, wet noodle as a strong female character, but I hate the way "weak female characters" (for lack of a better phrase) are being belittled.

Yes, I want girls to be strong. Yes, I think women should stand up for themselves and follow their dreams. But at the same time I know that not every women does. Are they unworthy of stories because of that? And besides, what is more interesting than writing about a "weak" character becoming "strong"?

More than that, I find this idea of the "strong female" implies that there is only one way to be strong. I mean, take a look at this flow chart I found on twitter yesterday (via @sarahlapolla): 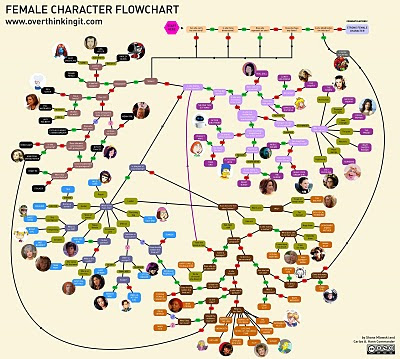 While it is comical, I also find this drawing sad in way. It's basically saying anyone who falls into any other category is NOT strong. And by saying that it implies they are weak. I'm not sure that's fair. It personally makes me feel a little horrible, because I don't think I'm a strong woman either! Nor do I think I write strong females, apparently.

Does that mean I'm bad? I'm weak? Lesser? I know that's not what this is trying to say, but it kind of feels that way.

I don't think there's one single, exact way for a woman to be strong. I also think your view of strong has a lot to do with your own preferences and beliefs in what strong is.

For example, I personally don't feel like an "over self-sacrificing" female is a weak character, though I know many people do. I think it takes a strong person to sacrifice their own needs for the good of others. Of course there's a line. Of course it can be crossed. But overall this character is someone (male or female) that I usually admire and think is strong.

Of course this is coming from a female who got married at 21, already has 2 kids, and chooses to stay home to take care of them. I know there are people out there who would think I "threw my life away" or that "I'm weak for playing into such blah traditions." But this is what I wanted, and I love my life and don't feel like I missed a thing.

I would never tell someone they should make the same decisions as I did, that the only way to be happy is to do what I did. There are so many ways to live life, and it's up to you to decide how yours will go.

Similarly, there are many ways to be strong, and I hope that we can respect that some of those ways may not be our cup of tea. I don't think that makes them wrong, as long as a person is happy and chooses that path for themselves. I think we should respect the individual strengths in every female character, instead of idealizing the so-called "strong female character."
Posted by Natalie Whipple at 9:34 AM