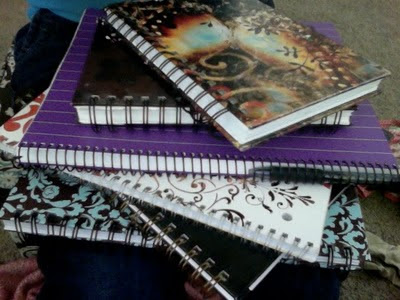 These were the notebooks just within reaching distance from where I was sitting. And you'd think I'd feel bad about that, but rounding them up and taking a picture made me smile.

I'm pretty sure that makes me a notebook addict.

But I need them! Each one of those contains different projects (from top to bottom: Technical Difficulties, Hammered [mostly, plus some old school Transparent], brand new for a Top Sekrit Rewrite, Transparent rewrite, Relax, I'm a Ninja [plus a little Spork], and some aliens and contemporary stuff).

I love to make notes by hand. I don't know what it is, but there's something in actually scribbling with a pen that gets my brain going. Though I mostly type my story out, much of the "behind the scenes" work happens on paper. I outline better on paper, edit better, brainstorm better.

I know it's not for everyone, and I'm not telling you to do the same. I'm just saying there's something about paper for me. Maybe it's the artist thing—pen and paper put me in that creative mode almost automatically, while typing puts me in a work mode. Both are good, but sometimes I just need to be creative and save the work for later. I suppose it's my way of finding that balance in writing.

Also, it let's me draw while making notes. I know, so fancy. It helps me figure out what things might look like in my world (yeah, they are blurry and backwards on purpose—sekrits abound!): 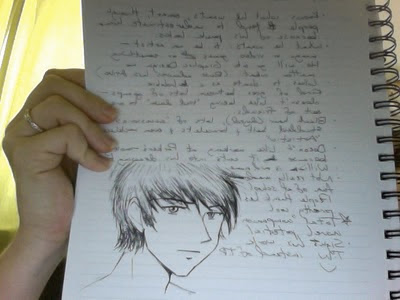 A character sketch/sheet. I like to explore characters, see if they'll open up a stalled plot. 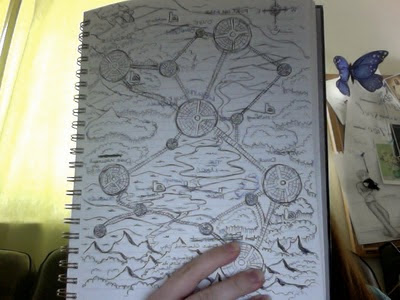 My first map from Spork. I've since revised a bunch, but there it is. 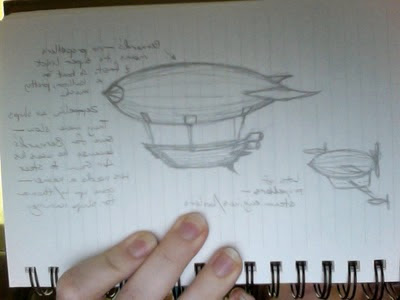 Airship! Also from Spork. It was fun playing with a fantasy story because there was so much more to imagine and draw.
So yeah, there's a little glimpse into part of my writing process. I think a lot of non-writers don't realize how much planning happens behind the words. It's like putting on a stage production. Hopefully the reader focuses only on the actors, and ideally no one sees the techies back there making all the magic. But without the techies? No show.

Now, excuse me while I go play with my new notebook. It has colored sections so I can categorize my notes! *Squee*
Posted by Natalie Whipple at 9:22 AM