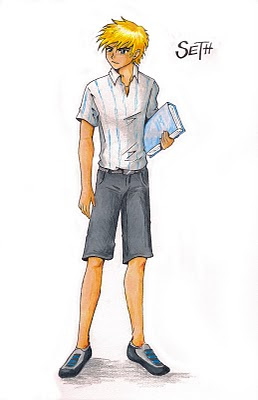 Of course I love all my characters, but then there are some that I LOVE, if that makes sense. Seth Mitchell from Transparent is one of those characters. I think I've drawn him several times, but here he is again! He's the first of a few character sketches I plan on doing for Transparent. Fiona's brother Miles is up next (which means nothing to you, huh. sorry). I should probably name the series. Like...The Guys of Transparent.

Now if that doesn't sound like an awesome calendar, I don't know what does.

Also, I want to profess my love for Ally Carter. I'm reading Only The Good Spy Young right now, and I'm in awe of her spy girl series. It just gets better and better, and I'm sure that is no simple feat. Her writing is so easy on the eyes, and her characters are fabulous. Sigh. Heist Society was also amazing. Can you tell I'm a huge fan? If she ever came to Utah, I would so be there, fighting to be first in line.

And to round out the news that is only cool to me, I should hit 50k in Transparent this weekend! Woot! I don't know what it is, but I love hitting 50k. For some reason that number means it's a book. It means the end is in sight. I'm guessing I'll finish around 60-65k, so yeah. Close! Then more edits! Yay.

Have a lovely weekend. I will likely have another sketch up tomorrow! So those of you who, like me, aren't at SCBWI LA, you have something to look forward to, right? Okay, it won't be that exciting, but I'll try.
Posted by Natalie Whipple at 8:21 AM