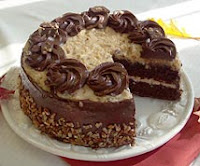 I remember because I wasn't much of a fan. I mean, it was alright, but it was so rich and sweet I could only stand a few bites. At one point I was so sick of seeing this cake everywhere that I wished the Germans would take it back. No, I wish they'd never brought it to America in the first place.

Many years passed before I ran into the German Chocolate Cake again. I was watching the Food Network (as I am wont to do), and they had this piece on the history of my German nemesis.

I watched, flabbergasted, as the host explained that German Chocolate Cake is named after an Englishman named Sam German, who created a dark baking chocolate—German Baking Chocolate. The chocolate became popular in the 1950s, at which point the recipe for German Chocolate Cake was created in AMERICA. If you don't believe my television recount, Wikipedia agrees.

And here I was blaming the Germans all these years.

We all know assumptions are bad, but today I want to relate them to our characters. Working on my new Sekrit Project (aka: Squishy), I've been thinking a lot about the process of getting to know those fake people we write so much about.

It's kind of like getting know real people, at least it is for me. Sometimes I think they're one way, and it takes a long time for me to truly see what's going on with them. Because of that sometimes story elements or character choices don't ring true, and I have to go back and figure out what my sneaky characters were hiding.

As an example, I thought my current MC didn't care about popularity. That's what they told me at first, but having written about 70 pages now I see that they were either lying or they don't realize how much they care. I know this is something I will need to go back and smooth out—it is something I couldn't have foreseen or managed because I just didn't know that much about my MC yet. They told me one thing—I assumed it was true.

That's why you always have to dig deeper into your characters. That's why you just can't avoid editing. That first draft is basically full of assumptions—about how the story should go, how the characters should act, what you're trying to say. You don't actually know until you've written it, and editing is like going through and erasing all those false assumptions.

German Chocolate Cake is not from Germany. And my MC really does care about popularity, though they don't want anyone to find out. Good to know.
Posted by Natalie Whipple at 6:56 AM