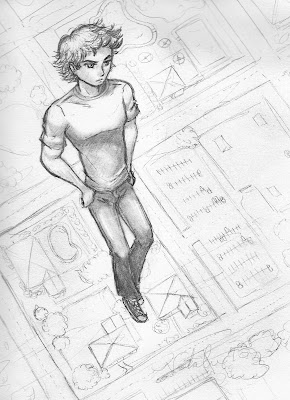 So apparently you guys like evil, because the vote was extremely in favor of Graham O'Connell, Fiona's oldest brother. As their crime lord father's favorite flying lap dog, Graham does whatever his dad orders, including hunting down Fiona and her mom when they try to escape. Suffice it to say, Graham is not Fiona's favorite person.

This is kind of an experimental sketch. Did I mention I've been putting myself through an art refresher course, so to speak? Well, I am. I'm trying to push myself to do things I don't think I'm very good at. Foreshortening would be one of those things.

Since Graham flies, I wanted to try some drastic foreshortening on the figure, as if we were looking down on him. You know, to give the feeling of height or whatever. I think it worked out better than I was hoping for, but it's certainly not perfect. I may do another, simpler, picture of Graham in color. I do like him, even if he's evil.
Posted by Natalie Whipple at 2:37 PM